I do just about everything but the accounting here at Thursday Night Press, and that includes book cover design, web design and ad design. I thought I did an okay job at those things, but I knew I could do better. My work lacked a certain "professional" look I couldn't describe.

My opinion of the book is succinct: If you have to do graphic design, and are not professionally trained, buy this book and read it.

Williams opens the book by describing four main design principles:
(Yes, they form a memorable acronym that Williams alludes to but never comes out and names. Neither will I.)

Well, I applied those principles to a web project I was working on—a Facebook catalog of TNP books—and the result was much better-looking than before, more interesting. And the most important thing was that I understood how and why the result was better.

Williams covers the four principles above, as well as color and typography. While she says she only barely touches on color theory and typography, I understand good color-scheme options better, and I can better pick typefaces that do and don't go together well. (I already knew all the typesetting rules she gave.)

This is not a thick book. And instead of lots of words, there are lots of pictures, so you can see what she means when she describes a concept and how to apply it. I understand she has another book out that goes deeper into typography; I intend to find it and read it, too.

Arthurian Themes in the Distant Future

When I first sat down to write Fisher King: Percival's Descent, I didn't intend for it to have Arthurian (as in King Arthur) themes.

My inspiration at the start was filker Leslie Fish's song "Ballad of Transport 57" (actually, I don't remember the number). This song is about a cargo ship in space attacked by pirates. The space navy chases away the pirates, but the transport has to limp to a starbase using its cargo--beer--as propellant.

I started Percival's Descent with a pirate attack underway. (I always find it easier to write openings by bombing into action underway.) In a nod to Leslie Fish, I decided to call the my cargo ship the Fisher King.

Immediately after picking the name, I knew I was onto something, because it made the name of the protagonist obvious to me: Percival, the fool and would-be knight of the Holy Grail legends. I decided to call him Percy, instead of Percival (although he prefers Perce), and have him, like both Percival and Perseus, raised by his mother in a community of women, away from the ways of men, until just before the age of eleven.

Also, the mythology made clear to me certain things that had to be true of the Fisher King. It is a wounded ship that has seen better days. It is also a barren ship, crewed entirely by men. The myths gave me the overall plot of the entire Fisher King series: Can Perce heal the Fisher King?

The Fisher King carries spaceplanes used to shuttle cargo between the freighter and planetary surfaces. By manufactured coincidence, one of these spaceplanes that figure prominently in the story is named Percival. That decision inspired the other part of the title: Percival's Descent.

I'm saving more mythology for the second novel, tentatively called Fisher King: Dancing Lance, where we will learn that Perce, again like both Percival and Perseus, is (figuratively) the son of a king.

You can read more about the book at https://cololitnet.com/node/71.
Posted by Unknown at 8:44 PM

A Novel in Search of a Title 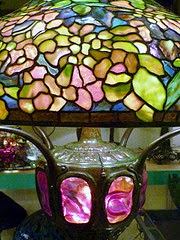 I'm getting ready to publish a suspense thriller that has a working title that's already in use by another novel. So, I'm looking for an alternative title, and I'll listen to all comers. I offer the following early draft of a synopsis, plus the fact that a Tiffany lamp figures into the story and will almost certainly appear on the cover:

Amy Dresden is tall, fit and blonde; she's used to men hitting on her and used to letting them down tactfully. So when an Armani-wearing, Jaguar-driving winemaker won't take no for an answer after he asks her to dinner, she gives in reluctantly. She is stunned when he proposes to her on their first (and she intended only) date. Her worries grow when numerous deliveries of flowers and stuffed animals begin to arrive along with a barrage of unnerving phone messages, and she turns to the owner of the gun shop next door for self-protection advice.

Pearce Martini always gets what he wants. Always. He thinks it fun playing peekaboo with the gorgeous, innocent, blonde angel he meets at an estate sale, who is playing an adorably chaste game of hard-to-get. But he saw in her eyes that she was just as instantly infatuated with him as he was with her. He knows that, unlike the other tramps that had fooled him before--and paid for it--she is pure and will be devoted to him.

Helen Wu's nickname when she was a cop: Dead Eye. The last thing she expected was for the antique dealer next door to come to her. Tall and blonde was just her type, but she can't flirt with someone who comes to her for help, can she? But she can hope, and yearn, as she helps protect her neighbor from the worst possible weirdo: a rich one.

If someone proposes a title, and the author and I decide to go with it, I can promise the namer a personalized copy of the novel when it comes out. I'm pretty sure I can even get the author to include personal thanks for coming up with such a brilliant name.

I probably need to add as rules or disclaimer to cover my butt that the winning title, if any, will be selected by me and the author at our sole discretion, and no one who submits a title is entitled to anything more than a chance to get an inscribed book for free and by submitting a title, you give up any claims to it.

[Since the original posting, newsletter signup has been added to the blog.]
Posted by Unknown at 9:32 PM No comments: