I'm excited that Thursday Night Press has been selected as the publisher partner for the Denver Writers Meetup 2014 Anthology. A panel of judges will select the content. The anthology will be edited by the Meetup's Robert Davis. Thursday Night Press will provide copy editing and ebook and print book design.

Any Colorado resident is eligible to submit a piece of fiction or poetry for consideration by the judges. All genres are acceptable except for explicit erotica and fan fiction. Word count must be between 1,500 and 18,000.

Submissions are being accepted by email only to denverwritersmeetup@yahoo.com. The piece should be attached to the email as a document in RTF format. Submissions must be received by October 1, 2013. Further details can be found at http://www.meetup.com/denver-writers/pages/Anthology/.

Information about the Denver Writers Meetup can be found at http://www.meetup.com/denver-writers/ and on Facebook at https://www.facebook.com/groups/126175650744082.

Does Your Story Plot or Plod?

Despite all good intentions to the contrary, I am still having trouble getting into the habit of blogging. I think it reflects my writing as a whole. I'm a good writer, but I have an imagination problem, or at least I believe I do. I'm just not a flow-from-the-pen writer, except in rare bursts. Writing is hard. That realization is part of why, in my humble opinion, I am a good editor: I respect writers because writing is hard.

Harder even than writing, though, is good storytelling, and that's what I want to talk about today.

I know an author (who I will try hard not to identify) who has completed two novels and is working on a third that are all imaginatively written, but all have the same deadly flaw. In all three books, the writing has good technical qualities: a line editor has to struggle to find errors in this author's writing. The characters are distinct, memorable and sympathetic. The words paint the scenes vividly while not getting in the way of the story. These are 100,000+ word stories in which much happens in a logical unfolding of the tales being told.

The flaw? All three stories leave me waiting for something to happen. Why?

No drama. I was waiting for something to go wrong, some obstacle to get in the way, something to test my sympathy with the characters. I liked the protagonists and wanted to take their sides, but it felt like there were no sides.

The flaw in these tales was that they lacked plots entirely, I concluded initially. After all, they failed my "one-sentence/one-question test." I am convinced that any story with a plot can be fairly summarized in one sentence. If you have trouble describing a plot in one declarative sentence, you can still usually name a question the plot raises. For example, the plot to my forthcoming novel, Fisher King: Percival's Descent, is best summarized as a question: Can a young nobody with eyes on the stars escape a dismal life that doesn't want to let him go?

I've changed my opinion, though. The stories, after some searching, did have plots. The deeper problem was a lack of tension stemming from a lack of conflict. In each case the plot question -- one was Can X beat the odds and prevent Y from Z? not a bad dramatic question -- had an apparent answer that was never in doubt for more than a few paragraphs at a time. Obstacles? Easily overcome. Turnabouts? None. Complications? Rarely and they never compounded.

In the story with the above-mentioned, X, the author showed in fiction how a slightly different X could have done better against Y than it had historically. The author built a good case that the difference mattered, but guess what? It came too easily. The difference was too much of a difference to keep the conflict interesting. The historical X struggled like hell against Y, which was interesting. Much less so the fictional retelling.

What can you learn from these three stories: conflict, more; struggle, more; certainty, less. What else can you learn? Know your plot. Have it firmly in mind, because it is the guide you need to know what kinds of conflict and sub-plots fit the story. When in doubt, return to writing about the plot, and by that I mean to move closer to or farther from resolving of the plot question.

Well, to paraphrase Forrest Gump, that's all I have to say about that, for now.
Posted by Unknown at 10:21 PM 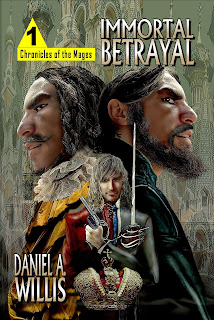